• Write and edit news, eBooks and special reports about biopharmaceutical trends for Fierce Markets. Write and edit Fierce Biotech Research, doubling traffic to the website in the first year after taking over the publication. Write news briefs about the biotechnology and pharmaceutical industries for Fierce Pharma. Wrote and edited the weekly newsletter Fierce Animal Health. Assembled and moderated panel discussions for the Fierce Biotech Drug Development Forum, which featured executives from such companies as Iovance Biotherapeutics, Karyopharm Therapeutics and Acceleron Pharma.

• Wrote the books Selling the Fountain of Youth: How the Anti-Aging Industry Made a Disease Out of Getting Old—And Made Billions (Basic Books, 2010) and Heal: The Vital Role of Dogs in the Search for Cancer Cures (ECW Press, 2015). Both books received positive reviews from Publishers Weekly, Bloomberg BusinessWeek, New Scientist and others. Heal was named among the “best books about cancer” by Newsweek.

• Designed and maintained the promotional WordPress websites for the books, sellingthefountainofyouth.com and healdogsandcancer.com. Promoted the books on television and radio talk shows broadcast by such outlets as KCRW Santa Monica, NPR Colorado and CTV Canada. Designed PowerPoint presentations to accompany book presentations at libraries, bookstores and conferences nationwide. Spoke at the Tucson Festival of Books, serving as both a panelist and moderator of discussions featuring such high-profile authors as former U.S. Surgeon General Richard Carmona.

• Elected to the Board of Directors of the Gastric Cancer Foundation in January 2018. Helped launch and write several issues of the organization’s newsletter, which included interviews with patients, oncologists and donors. Assisted in establishing a social media strategy for the organization. Provide ongoing consulting to an external public-relations team.

• Wrote two advocacy pieces for the Center for an Urban Future in New York, which were used for lobbying city and state policymakers. The first spotlighted the digital health industry, featuring interviews with more than 20 executives, venture capitalists and academic leaders who are working in the industry. The report charted the rapid growth of the digital health sector in New York City and proposed additional support for entrepreneurs in the form of government grants, startup incubators, networking events and more. The second investigated how delays and inadequate coverage by New York’s public transit system negatively affect commuters working in the health care sector.

• Investigated financial conflicts in medicine, producing a series of features that included “Medicine in Conflict,” which helped spark a Congressional investigation.

• Worked with producers of the CBS Evening News with Katie Couric to develop joint print/television stories on important medical topics. Collaborations included “Resveratrol: The Hard Sell on Anti-Aging,” an exposé about scam Internet ads for the red-wine supplement (2009); and “Doctors Under the Influence,” a story about physicians who fail to disclose financial relationships with drug companies (2008). Appeared on other television and radio programs to discuss science news.

• Managed the widely read cover package “Hot Growth,” spotlighting the 100 fastest-growing companies of 2005 and 2006. Assigned and edited company profiles, and produced an online slide show containing profiles of all the companies.

• Covered the Internet and biotechnology industries as a correspondent in the Los Angeles bureau from 2000 to 2004.

• Wrote and edited features on technology, entrepreneurship, finance and marketing.

• Wrote and edited profiles of public companies in a wide range of industries, including medical technology, computers, entertainment and dining. Wrote feature stories on a variety of topics related to investing in stocks and mutual funds.

• Wrote and edited feature stories about business insurance for the employee magazine of this insurance broker.

Heal: The Vital Role of Dogs in the Search for Cancer Cures shared a post.

Here's a great overview of cancers that are similar in dogs and kids and how the oncology research community can benefit by including dogs in clinical trials. ... See MoreSee Less

One organization facilitates research on sick canines to help generate treatments for children and animals. 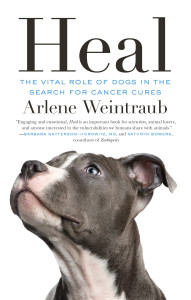